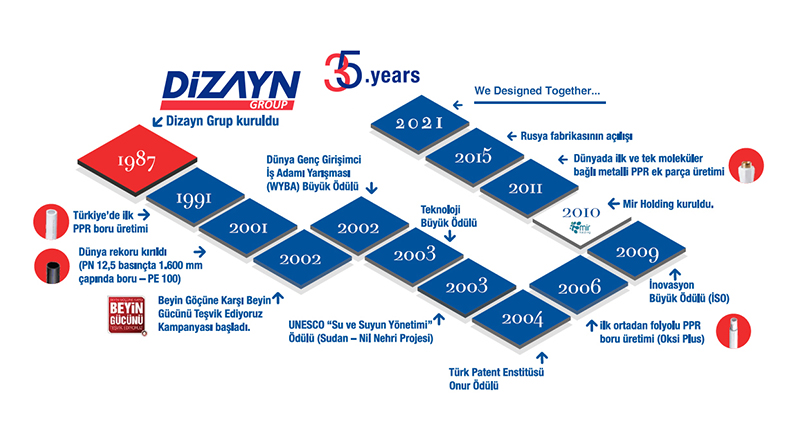 Being founded in 1987 to develop and implement projects in heating and plumbing sector, Dizayn Group began to manufacture underfloor heating pipes and then clean water pipes inside building. Mir Holding now is the largest of all group companies.
Organizing many educational and promotional activities to disseminate plastic pipe use, Dizayn Group performs productions indoors over 35.000 sqm and outdoors over 100.000 sqm in production facilities in Çorlu, Azerbaijan and Trabzon. Spending nearly % 5 of its annual turnover for R&D studies, Dizayn Group developed products each of which obtained certificates from independent institutions.
Some of the institutions are as follows:
MEYER ISO 9001: 2008, DVGW (Germany), Hygiene Institute (Germany), GOST (Russia), IMA (Germany), GOST (Ukrainian), NSF (USA).
Dizayn Group, exporting to over 80 countries including Middle East, America, West and East Europe, Russia, Turkish Republics, North Africa, Far East and Australia regions, has patents over 100 for its products. Furthermore, Dizayn Group was honored with an award by Turkish Patent Institute in 2004 for its contributions to development of technology in our country and world.
The success of Dizayn Group in such a very short time is due to its three separate missions. Dizayn Group with its Production Development Mission, produces 23 separate systems and kinds over 4000 with high pressure from 12 mm diameter to 1600 mm diameter, low pressure from 50 mm diameter to 8000 mm diameter, made of Polyethylene and Polypropylene raw material resistant for high earth and traffic load and through which fluids pass.
Products developed by Dizayn Group can be listed as follows:
Superstructure Products Group
- Clean water systems in building
- Waste water systems in building
- Heating equipment systems in building
Radiator Products Group
Infrastructure Products Group
- Drinking Water Systems
- Sewage Systems
- Natural Gas Systems
- Pre-insulated city heating systems
Agricultural Irrigation Product Groups
- Drip irrigation systems
- Sprinkler irrigation systems
- Drilling Pipes
Dizayn Grup has succeeded another first and broken a world record by producing 1600 mm diameter pipe with PN 12,5 pressure. on October 2001. Dizayn Group has manufactured this product, stated by its rivals worldwide as impossible to manufacture, with a completely different technology than the known in an excellent way. Thus, Dizayn Group has  manufactured the first industrial product, the first of the world, with this record.
Dizayn Grup supports dozens of doctoral, master, licensing and project studies being carried out in various universities of Turkey in recent years. Project and test subjects of these studies fall under the expertise of Dizayn Group. Articles more than 30 prepared with the support of Dizayn Group have taken place in various national and international publications.
Dizayn Group with Investor Mission invests in its products. Dizayn Group, in coming years, aims at becoming a multinational firm acting on international platform with its internal and external investments.
Dizayn Group with its Project Develeopment Mission takes the fluids from where there is too much and returns them where there is less and develops projects for urban heating, meeting need of drinking water, agricultural irrigation. Here it projects a complete system with primary and secondary distributions and makes systems for the project.
Dizayn Group who has many successful projects at home and abroad was awarded with “Water and Water Management” award by UNESCO with its project taking water to Sudan. The award ceremony, held in Cannes, France was performed under “Water Symposium”. The most important feature of this award is that it was granted to a private company, Dizayn Group, for the first time in its history.
On the other hand, Dizayn Group was entitled to participate in World Final of the contest as the owner of both Universal Contribution Award and First Prize in Turkey final of World Young Entrepreneur Businessman Contest. İbrahim Mirmahmutoğulları, the chairman of Mir Holding, has represented our country successfully in World Final, an international organization and held in Philippines with the participation of Germany, England, Netherlands, totally 12 countries and awarded with World Young Entrepreneur Businessmen Contest.
Another project carried out successfully by Dizayn Group is “Brain Power versus Brain Migration” campaign. The goal of the campaign first of which was held in 2002 is to prevent productive minds from transferring  abroad and provide support for the projects to be acquired for the economy.
We are aware of our responsibilities. The world needs Dizayn!